Hanuman Das, also known as Greg Clarke, has spent many years trying to work out why men are less inclined to practice yoga or to explore a path of inner reflection. So, Hanuman, who runs a small yoga and meditation studio at Toronto on Lake Macquarie, south of Newcastle, wrote a book called Peaceman, Beyond Masculinity, Divinity to explain why they might want to take a closer look.

It’s a rarity on both the spiritual and self-development bookshelves. A book for men, mixing themes of masculinity, communication, sex, power and self-exploration.

“I was trying to understand why we couldn’t get more men into these sorts of practices, whether they be yoga or meditation. So, I started to lead workshops with men only,” he says.

“Men, as a rule of thumb, like to read about of these sort things and understand them first before they commit.”

Initially Peaceman was conceived as an easy brochure, “with the idea of introducing guys to a gentle and easeful way of looking inside for their health and mind, body and spirit”.

It took him six years to complete, and there was so much to say, the brochure became a book and will be released at the Living Peace Yoga centre at 7.30am on International Men’s Day, 19 November, before the morning’s class.

“It’s a good manual, I feel confident that it can help men find a little bit more serenity and inner strength,” says Hanuman, who partnered with Little Steps Publishing and has already sold a few hundred copies.

He has found, through 18 years of teaching, that men are more open to practising meditation, but as a general rule, they are more hesitant with learning yoga postures.

“I think it’s seen as a female thing. There’s a lot of expression of feelings and touch and hugs and constant interaction. For a guy early on in their path, that is very confronting. The openness of that environment has helped some men a lot and hindered others.

“That’s the way I wrote the book; it’s got a balance of reason and emotion.

“There’s a lot of perception in society for men to look a certain way and it’s not always linked up with inward reflection and advancement on their soul.”

The book is set out in different chapters covering communication models, sex, power and masculinity in its different phases.

“We work on how to communicate better in relationships, how to be honest and open with our sexuality and not be governed by it, finding our own masculinity and how it’s shaped. One of the big chapters is on purpose and finding your purpose as a man.

“We explore the principles related to working with your masculinity and going beyond masculinity to your divinity.” 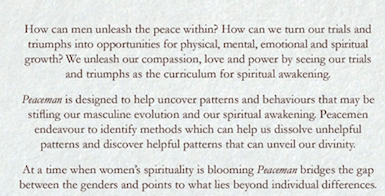 An excerpt from the back cover of Peaceman.

Peaceman includes practices, meditations and guided visualisations and shows readers, “how to communicate skillfully and openly. How to work with whatever issue your karma has got involved in.”

With endorsement from his teacher Ram Dass on the cover, who describes Peaceman as “a practical and heart-felt exploration, with a roadmap to being peace …” Hanuman says this sort of material might not be relevant for blokes who are happy with the way their lives are travelling.

“If there is any sense of unease, that the world has not got everything you need materially, then it is very important that you start to look inside,” he advises.

“So, you go back to the texts and the sacred practices and the answers, for me, have been there. It has become the focal point of my life.

“To reflect on who I am, what I am met to be doing here and how to get free from all the attachments and aversions and lack of clarity in my life. The answer for me has been through inner reflection.”

Growing up as a Christian, Hunaman’s early professional life included a stint as a salesman, promoting Blackmores nutritionals around Sydney.

He listened to many motivational speakers in order to improve his positivity and personal selling power, but none resonated more than the teachings of the late Wayne Dyer, Deepak Chopra and Ram Dass, formerly known as Dr Richard Alpert, a prominent Harvard psychologist whose subsequent work explored human consciousness. The latter became his long-time teacher and Hunaman has visited Ram Dass many times at Maui on retreats and for personal guidance.

It was Ram Dass who gave Hunaman his Hindu name, which translated means ‘monkey god’, a deity known for his strength, loyalty and extraordinary feats. Hunaman now prefers this to Greg Clarke, as “a full expression of my soul” and has devoted his life to service.

For this stage of his life, that has involved an exploration of how men deal with spirituality and life in general. During male-specific meditations, he asks men to reflect on being male and believes International Men’s Day is the perfect time to launch Peaceman fully.

“It may be of assistance to men who have mental issues and who have aspirations to go beyond masculinity,” he says.

You can purchase a copy of Peaceman, Beyond Masculinity, Divinity at:

*Prices vary according to the seller.

ATTEND THE BOOK LAUNCH ON NOVEMBER 19