G’Day mate. Anyone hearing those words would assume the speaker was an Australian.

The term is used to describe friends, colleagues – and sometimes adversaries – as well as being a national Aussie character trait. Mateship.

(The term actually has its origins in the German word ‘gemate’, which means to share a meal at the same table).

While it’s great to have friends, to have mates is even better. Mates have your back. Mates don’t judge. Mates hang out. Mates might give you a hard time, but underneath the ribbing they rather like you and wouldn’t let you down.

Fact or fiction? Why are mates important to you?

Blokes Psychology points out that it’s the quality of genuine human connections that predict our happiness.

“Not the size or postcode of your house, brand of your car or money in the bank. 'Social connectedness' decreases the chances of mental health deterioration,” the men’s counselling service stated several years ago in an article titled ‘Why men have no friends.’

At the time, studies showed that men valued having mates and thought them essential, but 85% of Aussie males struggled to find enough time to catch up with mates, especially as they got older.

READ: WHY MEN HAVE NO FRIENDS

What do you do to keep in touch with mates, or develop new friendships?

La Trobe University in Melbourne has published 5 ways to be a good mate. Their recommendations include:

“It’s not about the number of friends you have or whether or not you’re in a committed relationship; it’s the quality of your close relationships that matters most. Having good relationships with mates that we can talk to before things get off track can make a big difference. Sometimes they can be the key to taking the steps that people need to turn things around or to reach out to professional supports that are available.”

Why are mates important to you? 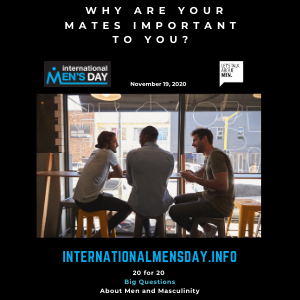 A MATE CAN DO NO WRONG