20 for 20: Should we encourage more men to take on roles traditionally dominated by women?

To begin with, let’s consider the future of work.

A recent study published at Science Direct reported that, since the 1970s, many jobs and sectors traditionally dominated by men have contracted or disappeared and the demand for jobs traditionally held by women has increased significantly.

“In fact, women dominate the majority of industries projected to have the highest job and wage growth over the next decade,” states the research.

What are these male-dominated industries? They include construction, manufacturing, agriculture, information media and telecommunications.

Popular female industries are health and social care, education, accommodation and food services, rental and hiring services, retail and public administration. These are all booming. 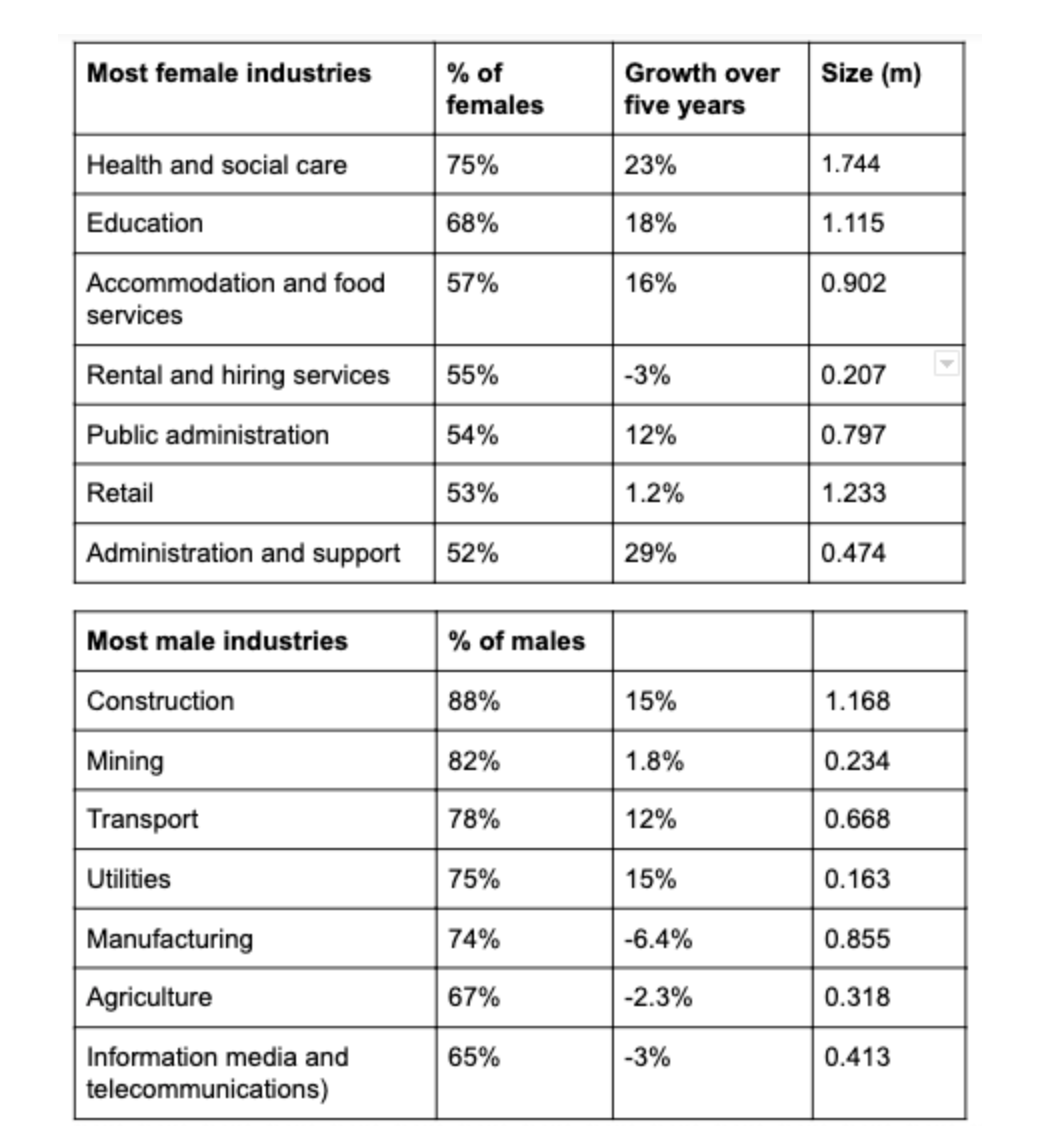 A portrait of slow-growing and fast-growing industries in Australia. Credit: Crikey 2019

Which is why more forward-thinking educators are actively encouraging students to consider work that might typically attract more females.

One of them is Philip Britton, principal at a private boys’ school - Bolton School in Greater Manchester - UK, who says male employment will suffer overall if young men do not consider careers that rely more heavily on creativity and caring.

Girls have successfully penetrated male-dominated fields like science and engineering, but schools in the UK had less success attracting boys to caring professions.

“I think we’ll find over the next decade that caring professions probably will be valued more highly,” he said in January.

Aside from future job prospects, it is widely believed that most professions benefit from a diverse and inclusive workforce, including those traditionally dominated by women.

A growing number of men have been breaking through the gender barrier to pursue a career in nursing. The Good Men Project says 2% of nurses in the US were men in 1960, compared to 13% today and a projected 20-25% percent within the next decade.

Read: A look at the growing trend of men becoming nurses

In Australia, 10% of men are registered nurses.

Some people prefer to be cared for by males, whether in aged care, a hospital setting or medical clinic. This could be for cultural reasons or because males like to be treated by someone of the same gender and feel less vulnerable.

In the education sector, it is widely recognised that male teachers play a crucial role in child development, particularly those growing up without a strong male figure in their lives.

And yet three per cent of all educators in the sector are male.

“This is not to say that mums don't do a good job, but boys need male role models, in school in particular, it’s very sad – I’ve been in schools where there are no male staff bar the groundsmen,” said leading Australian expert on child development, associate professor Dr Michael Nagel at Queensland University.

Deakin University in Melbourne points out some more advantages of men joining a female-dominated industry, and addresses concerns about whether men might feel weird or uncomfortable challenging the status quo.

For starters, you might be the only male on staff. “I got work easily – on a pile of applicants I stand out,’ says Max Grarock, a kindergarten teacher now tutoring at Deakin in the Master of Teaching.

Read: It’s a man’s world, or is it? What it’s like for men in female-dominated industries

The future of work

The Australian Government lists five things everyone should be aware of in the changing world of work.

With this in mind, well might we ask: Should we encourage more men to take on roles traditionally dominated by women? 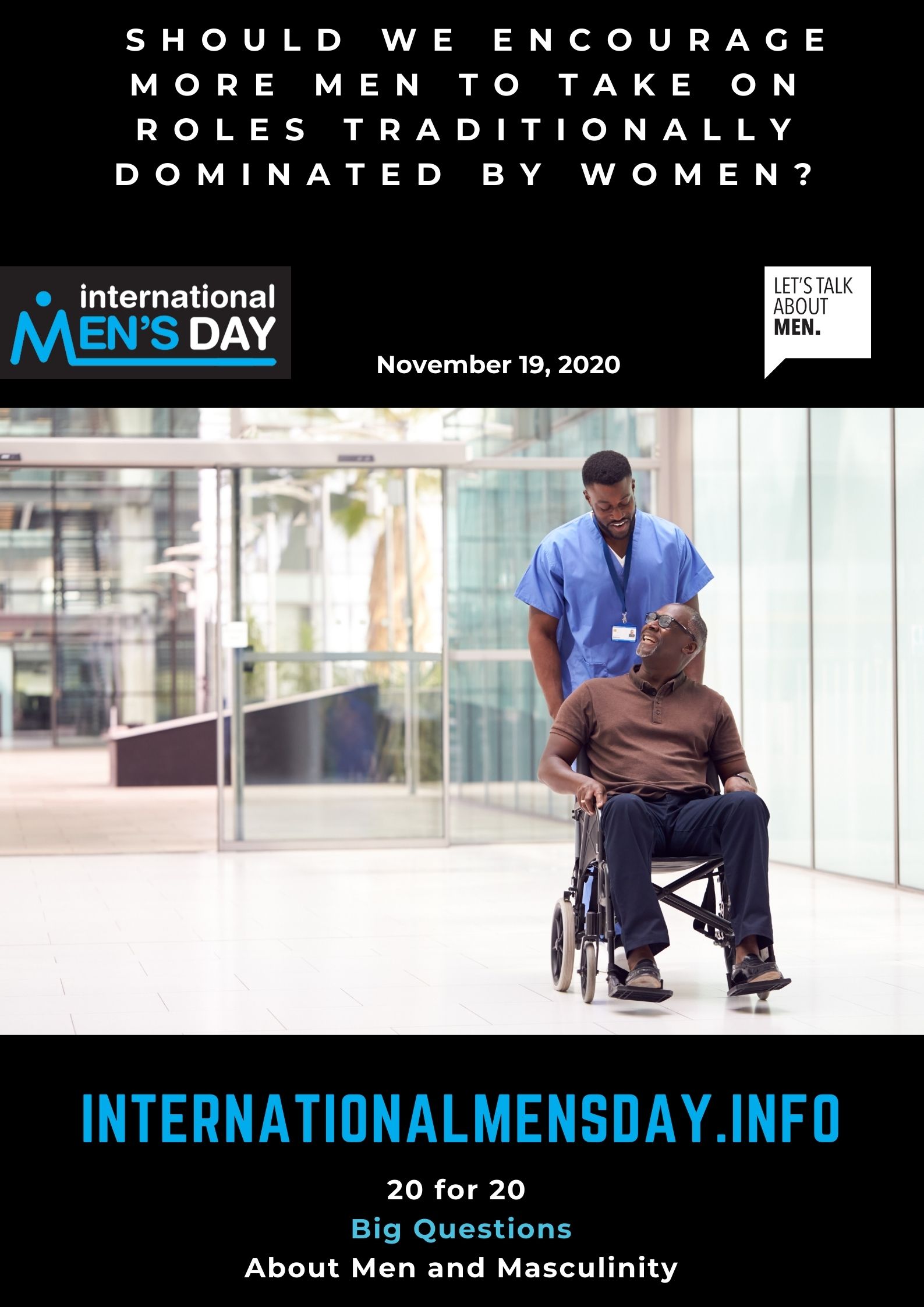